When would I ever want to pick a random point in a circle? 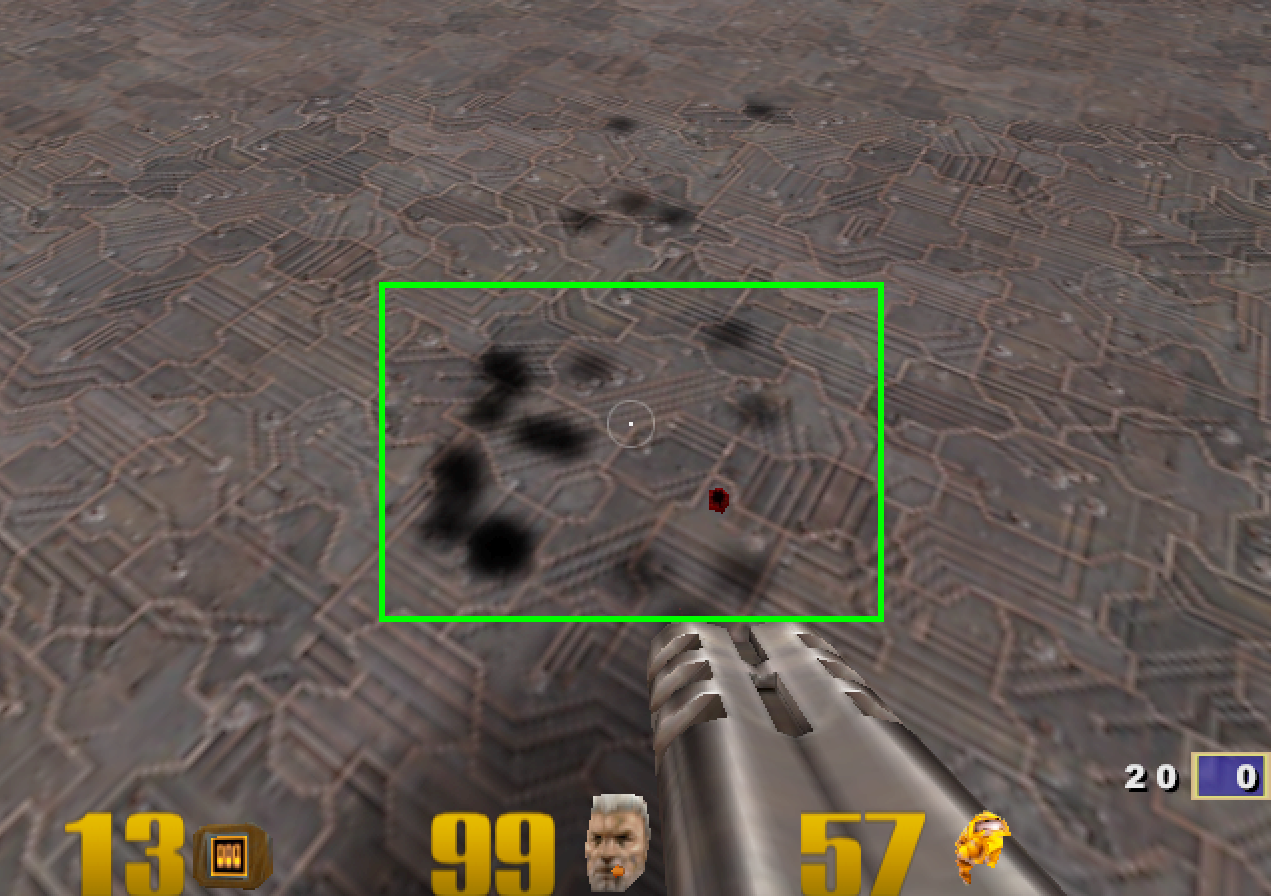 One way we could simulate the shotgun spread mechanic is by allowing a Designer to specify a max radius. We could then pick a random point from the center of our reticle to the max radius.

How do we get a random point in a circle? 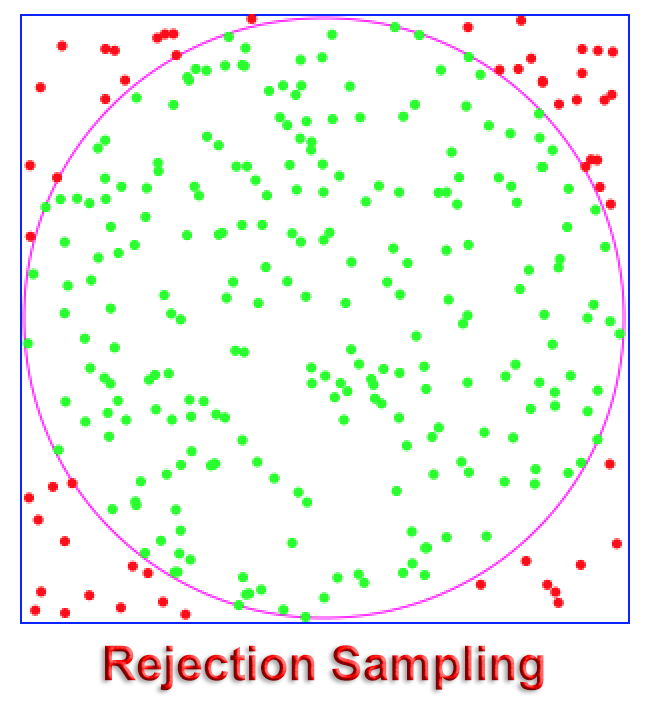 Using the box method, we will get results that look uniformly distributed however there is a price to be paid.
There is no way to guarantee how many random points you will end up with unless you sit in a while loop until you have all the points you want. You can use a while loop if you prefer but there is no way to know how long this operation will take. This might be acceptable if you are using the box method during an initialization process but if you need to pick random points in a circle per frame or in an update loop, there are much better ways of doing it.

is the angle about which we rotate around the center point. 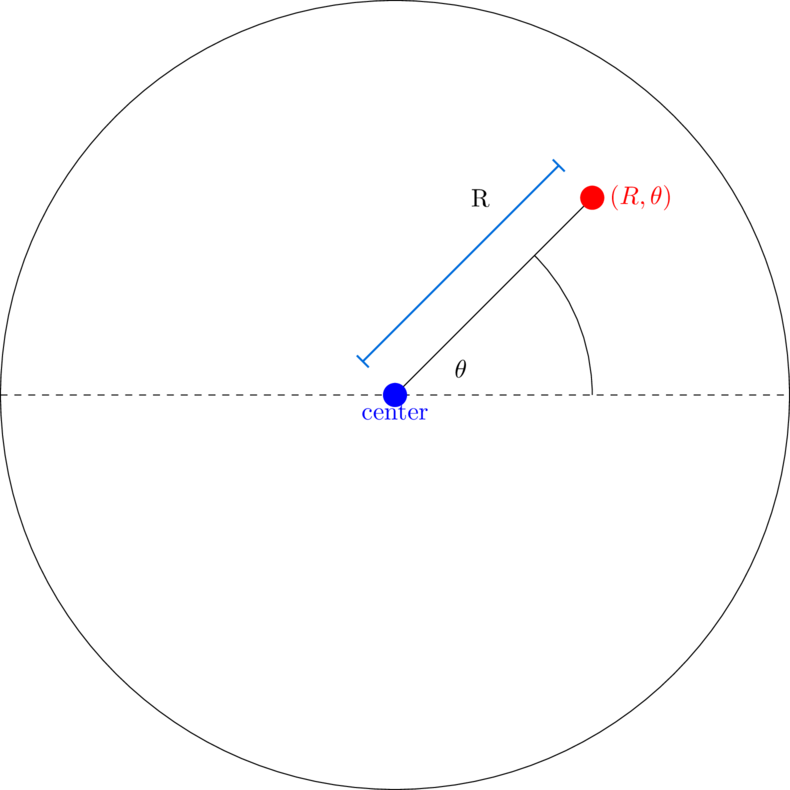 but this will give us an output like this 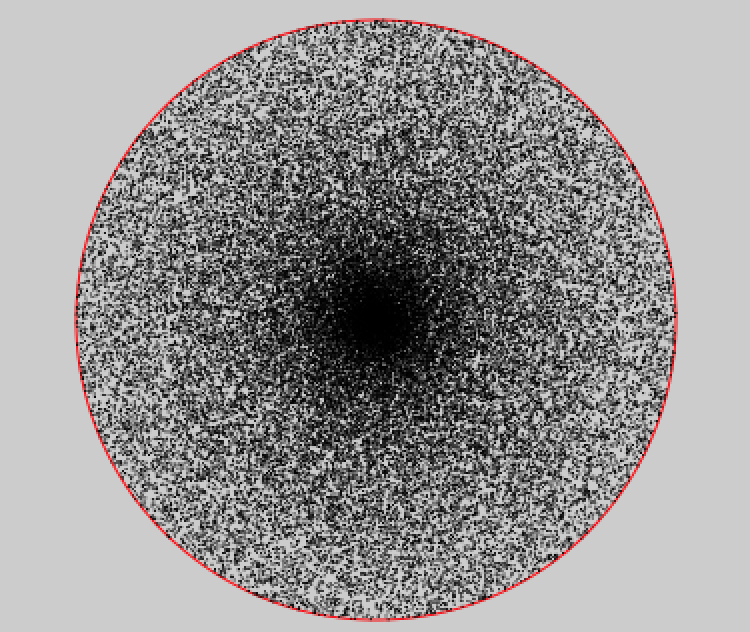 Notice how we chose more points towards the center of the circle than towards that outer edges of the circle.  For some games, this spread may be appropriate. However what if you wanted your points to be uniformly spread out and not so dense in the center?

So why does randomly choosing an angle and radius make our random point selection more dense towards the center? Imagine you only have 50 points and you want to randomly distribute them about a very small circle. You will probably be able to do that just fine. However as you scale the circle out, you will start to have more and more area that you need to cover but not enough points to cover all the area because you are limited to only 50 points. Take a look at Figure 6 to visualize this.

Exploiting the Area of a Circle

.
The area of a circle is agnostic to any kind of probability. So if we could derive the formula for the radius based on the area of a circle, we should be able to randomly distribute our points in a uniform fashion.

Now pay close attention to the relationship between the the fraction

and the area of a circle which is

In both math and philosophy, it is often wise to test the limits or extreme cases of a statement to find out whether that statement is logically consistent and what ultimate conclusions that statement may lead to.

What would be the area of our circle if our radius was 1?

So forget about what the *actual* radius is of our circle. Lets keep things simple and pretend that our circle’s radius is between 0 and 1. Our fraction

means that when the Area is 0,

and when the area is

. However since we are taking the square root of our fraction, it gives less weight to lower values than does the earlier linear version we tried. That is exactly what we want because the problem we were running into earlier was that we gave too much weight to points closer to the center of the circle and not enough weight towards the edge of the circle. Take a look at Figure 7 to visualize the difference between square root vs linear weighting. 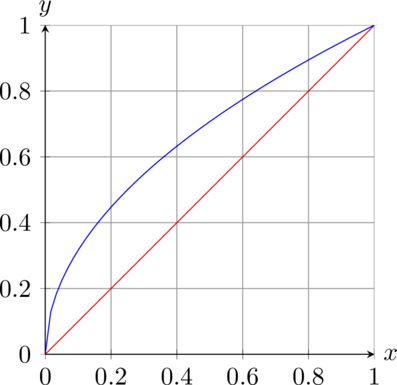 So really we can substitute our fraction,

, under the square root with any number between the values of 0 to 1.

As seen in the graph in Figure 7, the value of

will still be within the range of 0 to 1 which we can use as a percentage scalar to multiply by the actual radius!

Therefore to pick a random uniformly distributed point in a circle using polar coordinates, we can do the following,

Figure 8 was generated via the following Processing sketch.

If Unity is your game engine of choice, you can pick a random uniform point like so,

Hopefully by now you have gained insight with regards to picking a uniformly distributed point in a circle.
Using polar coordinates gets you mostly there but you must also take the circle’s area into account. We do that by using the area of a circle formula to make our random radius proportional to the area of the circle. Most popular game engines like Unity already support a method to pick random points in a circle. However you should now understand what is happening under the hood. Until next time!